09 May Tree and Shrub Spraying

Spraying your tree’s and shrubs treat many pests and diseases. Tree’s can be treated either by spraying them or applying a dormant oil. Our technicians can evaluate your tree’s and shrubs and identify which method of treatment will be best for you.
There are several different diseases and or insects that can be on a tree. Identifying the disease is key to the most effective treatment. Important factors in the best effective treatments are, weather conditions, temperatures at the time of treatment, humidity, and the life cycle of the pest at the time of treatment. Several diseases of trees are treatable with sprays.

Plants exhibiting aphid damage can have a variety of symptoms, such as decreased growth rates, mottled leaves, yellowing, stunted growth, curled leaves, browning, wilting, low yields and death. The removal of sap creates a lack of vigor in the plant, and aphid saliva is toxic to plants. Aphids frequently transmit disease-causing organisms like plant viruses to their hosts. The green peach aphid, Myzus persicae, is a vector for more than 110 plant viruses. Cotton aphids (Aphis gossypii) often infect sugarcane, papaya and peanuts with viruses. Aphids contributed to the spread of late blight (Phytophthora infestans) among potatoes in the Irish potato famine of the 1840s.

The cherry aphid or black cherry aphid, Myzus cerasi, is responsible for some leaf curl of cherry trees. This can easily be distinguished from ‘leaf curl’ caused by Taphrina fungus species due to the presence of aphids beneath the leaves.

In plants which produce the phytoestrogen coumestrol, such as alfalfa, damage by aphids is linked with higher concentrations of coumestrol.

The coating of plants with honeydew can contribute to the spread of fungi which can damage plants. Honeydew produced by aphids has been observed to reduce the effectiveness of fungicides as well.

A hypothesis that insect feeding may improve plant fitness was floated in the mid-1970s by Owen and Wiegert. It was felt that the excess honeydew would nourish soil micro-organisms, including nitrogen fixers. In a nitrogen poor environment, this could provide an advantage to an infested plant over a non-infested plant. However, this does not appear to be supported by the observational evidence.

The damage of plants, and in particular commercial crops, has resulted in large amounts of resources and efforts being spent attempting to control the activities of aphids.

A number of species of aphids of the genus Cinara feed on spruce and fir in North America, but do not cause noticeable injury (Rose and Lindquist 1985).Their long feeding tubes pierce the bark to take up sap from shoots, twigs, branches, stems, and roots. Aphids of most species feed in groups and are usually attended by ants, which feed on the droplets of excreted liquid. The aphids range in color from grey to brown or black and are less than 5 mm long. All aphids overwinter in the egg stage. Eggs are blackish and are laid singly or in rows on the needles. Six generations in 1 year are not unusual in Canada, with succeeding generations often moving to new sites on the tree, including the roots, as the season progresses. The life cycle is complex. For example, adults of the intermediate summer generations consist of females only, some winged and others wingless, which produce tiny nymphs rather than eggs. Males occur only in the late fall generation, which produces the overwintering eggs. 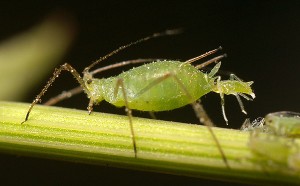